Restoration of Thompson Run - A Tribute to Joe Humphreys

Some 70 years ago, Thompson Run was a classic limestone trout stream. It began at Thompson Spring, located about 200 yards southwest of the Duck Pond. From the spring, Thompson Run ran down a sluiceway located where the center line of Benner Pike is now. It then joined the present streambed, flowed behind Blaise Alexander Auto

Sales and Your Building Center, and meandered through a meadow for a mile or so before its confluence with Slab Cabin Run, a short distance from Spring Creek. Throughout its course Thompson Run was and is the recipient of numerous limestone springs, Walnut and Bathgate Springs being the most prominent. The stream not only harbored excellent populations of brook and brown trout but provided a clean, cool flow of water for Spring Creek.

In the fifties, when Benner Pike was rebuilt, Thompson Run was diverted into the Duck Pond, which is used as a settling basin for State College's and the University's storm water. Thus the pure, cool spring water became intermixed with the warm stagnant pond water. The flow of Thompson Run became a hot, polluted stream instead of a cool, clean one. Also, both State College and Penn State dumped their sewage effluent, originating in the PSU Waste Water Treatment Plant, into the stream. The effluent carried high levels of phosphorus, chlorine and other polluting chemicals

Joe Humphreys, who fished this stream as a boy, saw the potential of restoring Thompson Run to its former condition. He first discussed this project with the Spring Creek Chapter of Trout Unlimited at the June 1975 meeting. The idea was batted around and became even more enticing when Penn State announced that it was going to initiate the Living Filter concept and would no longer pour its sewage effluent into Thompson Run; rather, it would pipe it several miles away and spray it on University property and State Game Lands 176. A plan was drawn up to construct a dike which would carry the Thompson Spring water directly to Thompson Run without going through the warm, stagnant water of the Duck Pond.

The estimated cost was $30,000, but there was only $120 in the Chapter treasury. So the Chapter met with representatives from PA Trout Unlimited State Council to enlist their support and ask for funding for the proposed project. Neither support nor funds were forthcoming, so the Chapter went about seeking help from local sources.

Joe first reached out to Penn State and the Pennsylvania Department of Environmental Services for approval. There were few written restrictions at the time and, with the oral approval from the University and Department of Environmental Resources in hand, Joe Humphreys employed his charm and tenaciousness to convince the Glenn O. Hawbaker Construction Company to build the dike in conjunction with their dredging operation of the Duck Pond. Whitey Glenny, Hawbaker's foreman, gave tremendous support, and Hawbaker's donation of manpower, machinery and materials made the project possible. In addition, Herbert R. Imbt donated the pipe for the cut through the breast of the dam, Centre Concrete and Sheesley Supply Co. gave concrete for the sluiceway, Claster's donated reinforcing wire and lumber, Neidigh's Quarry gave additional fill and the University donated a backhoe and an operator. John D. Miller and Lloyd Niemann of the University's Physical Plant gave strong support to the operation.

With this type of support from industry, the University and Chapter members, it wasn't long before Thompson Run once again flowed in its own course and bypassed the Duck Pond. Thus in the fall of 1977, Spring Creek was again recharged with the cool clean spring water of Thompson, Walnut and Bathgate springs.

The above picture shows the building of the dike. The picture was published in the Centre Daily Times on January 3, 1978, and shows the difficult time that the workmen from Glenn O. Hawbaker, Inc. had in constructing the dike in a very confined area. The machine operators had to be careful to stay on solid ground so the machine would not become stuck. Fortunately, no significant mishaps occurred during the construction and Thompson Run was restored to a coldwater wild trout producing stream.

But the dike, after its construction in 1977, was very narrow and not stabilized. In addition, muskrats began working in the dike and significant repair work was needed to maintain the integrity of the dike. The Chapter could not ask any more of Hawbaker and at this time funds in the Chapter treasury were not sufficient to finance more work. But more repair work was done in August of 1979, when eight tons of fill were used, and in succeeding years. Then in 1983 the Chapter received a matching grant of $1,400 from National TV's Living Brightwaters trust program. During several weekends in August a backhoe and enough fill were brought in to properly repair, raise and riprap the dike where needed. Seeding was also carried out at this time. The repair work was planned and organized by Dan Shields, then chairman of the stream improvement committee.

The Thompson Run project, conceived and directed by Joe Humphreys, is without a doubt one of the most important stream improvement project completed by the Chapter. Not only has the trout fishery of Thompson Run been restored but now upper Spring Creek is recharged with a constant supply of cool spring water. Thompson Spring itself discharges over 4000 gallons of water per minute. This restoration project improves all of Spring Creek downstream of Thompson Run. A report on the project appeared in the winter issue of Trout, the National TU magazine in 1982.

Dedication of the Plaque at Thompson Run

Subsequently, Moyer Jewelers donated a bronze plaque in recognition of the completion of the project. Then Chapter President Judi Sittler and Board Member Bob Donaldson undertook a project to have the plaque mounted on a large rock by Phillip Wolfe. In May of 2016, the plaque was mounted by Phillip Wolf on a large rock and a tree was planted to commemorate the accomplishment in a ceremony that also included planting of a commemorative tree (Click here to read an article regarding the memorial plaque and dedication).

Bob Vierck, President of the Spring Creek chapter, said the project was important in the effort to revitalize the fisheries of the creek, keeping the heated water of the duck pond from flowing into the cold water of Thompson Run.

“It’s the premier fishing stream in Pennsylvania, and is a world-class stream without a doubt,” Vierck said. “It’s really phenomenal.”

Photo 6: Joe Humphreys helping to plant a commemorative tree at the site of the memorial plaque for Thompson Run in 2016

In early 2016, the Spring Creek Chapter of Trout Unlimited and the Penn State Office of Physical Plant began planning a restoration of the Thompson Run dike. Over the years since 1976, the dike had been damaged by the planting of large trees that had large root balls and eventually were blown over during bad weather, damaging the dike. By 2016, nearly half the flow was leaking into the Duck Pond. After much planning, Penn State funded and provided support to repair the dike. SCCTU provided volunteers to clean out the dike, to plant a buffer in some areas and begin to repair the dike.

Photo 7: Members of the Spring Creek Chapter of Trout Unlimited working to clear the by-pass of debris so that repairs could be made to the dike separating Thompson Run from the Duck Pond

The restoration and maintenance of Thompson Run was accomplished with the hard work and generous donations of many individuals and businesses, but we are most indebted to Joe Humphreys for his vision and dedication to this project.

The first section of this article, which covers events up to 1983, was taken from “A BRIEF HISTORY OF THE SPRING CREEK CHAPTER”. Frank Zettle was the principle author of the history, published in 1992. The remainder of the article was written by several authors including Robert F. Carline and Robert K. Vierck. 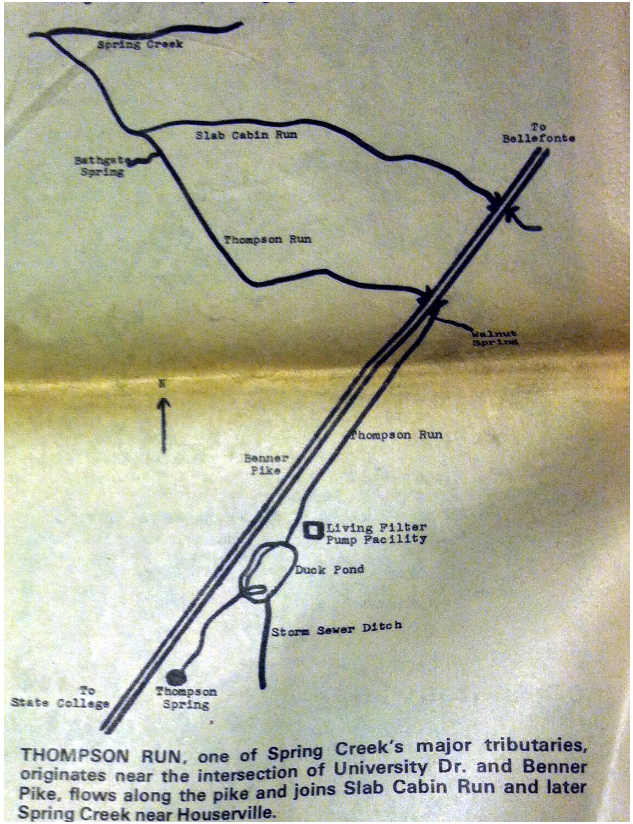 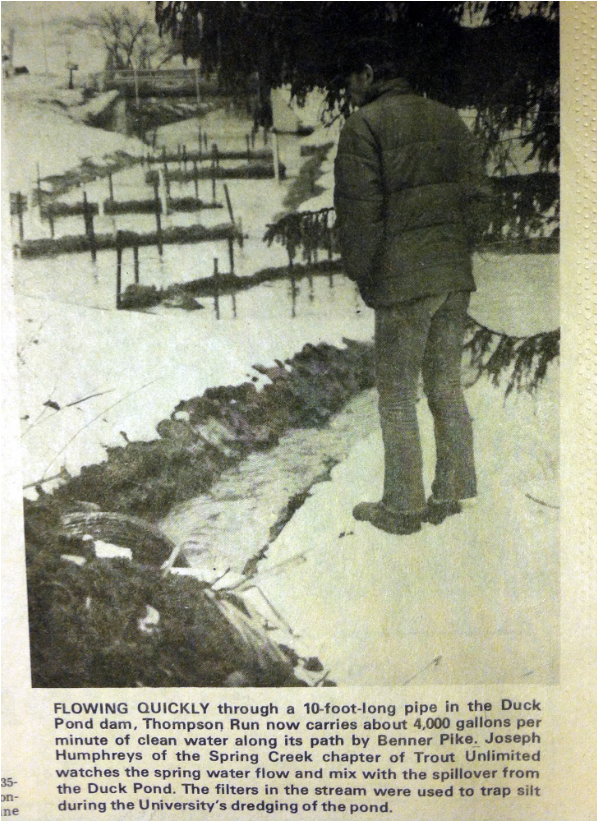 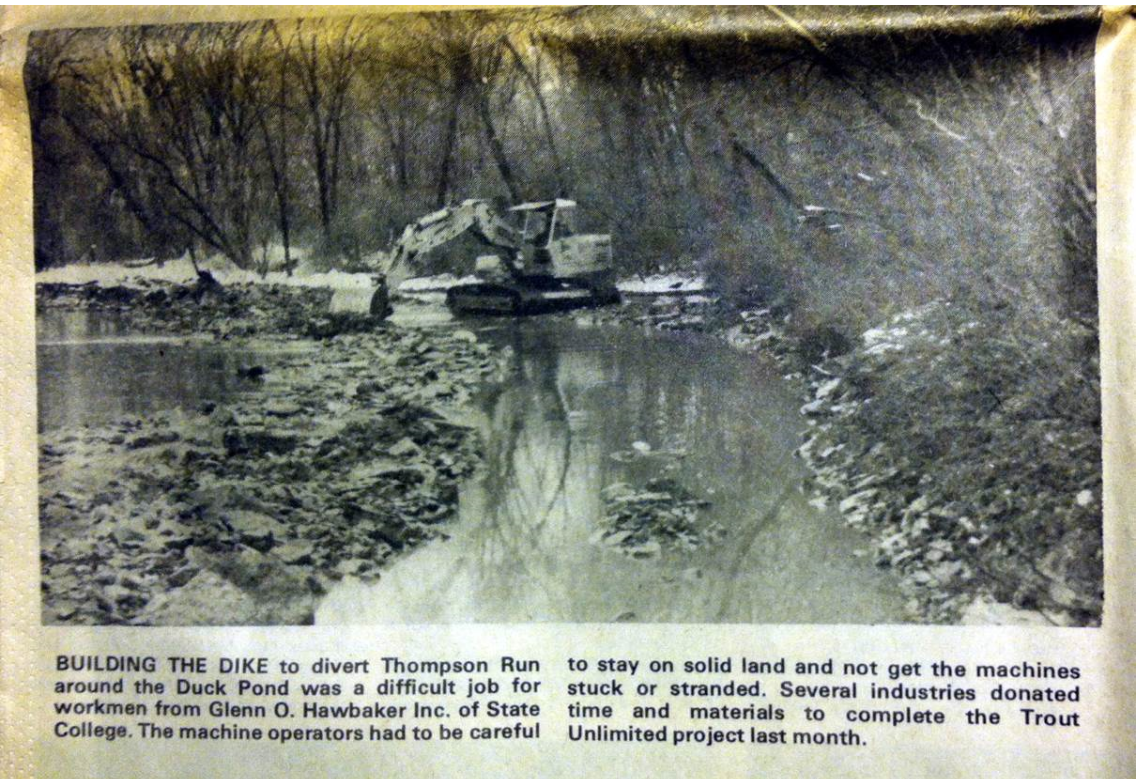 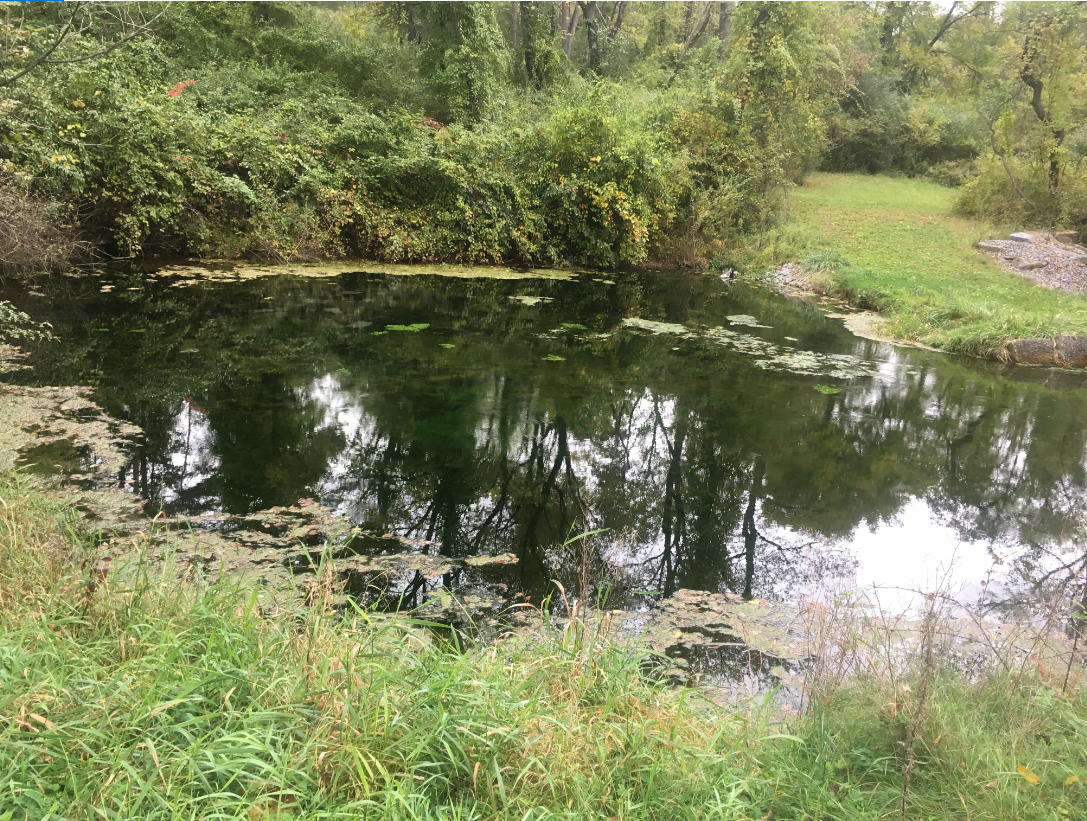 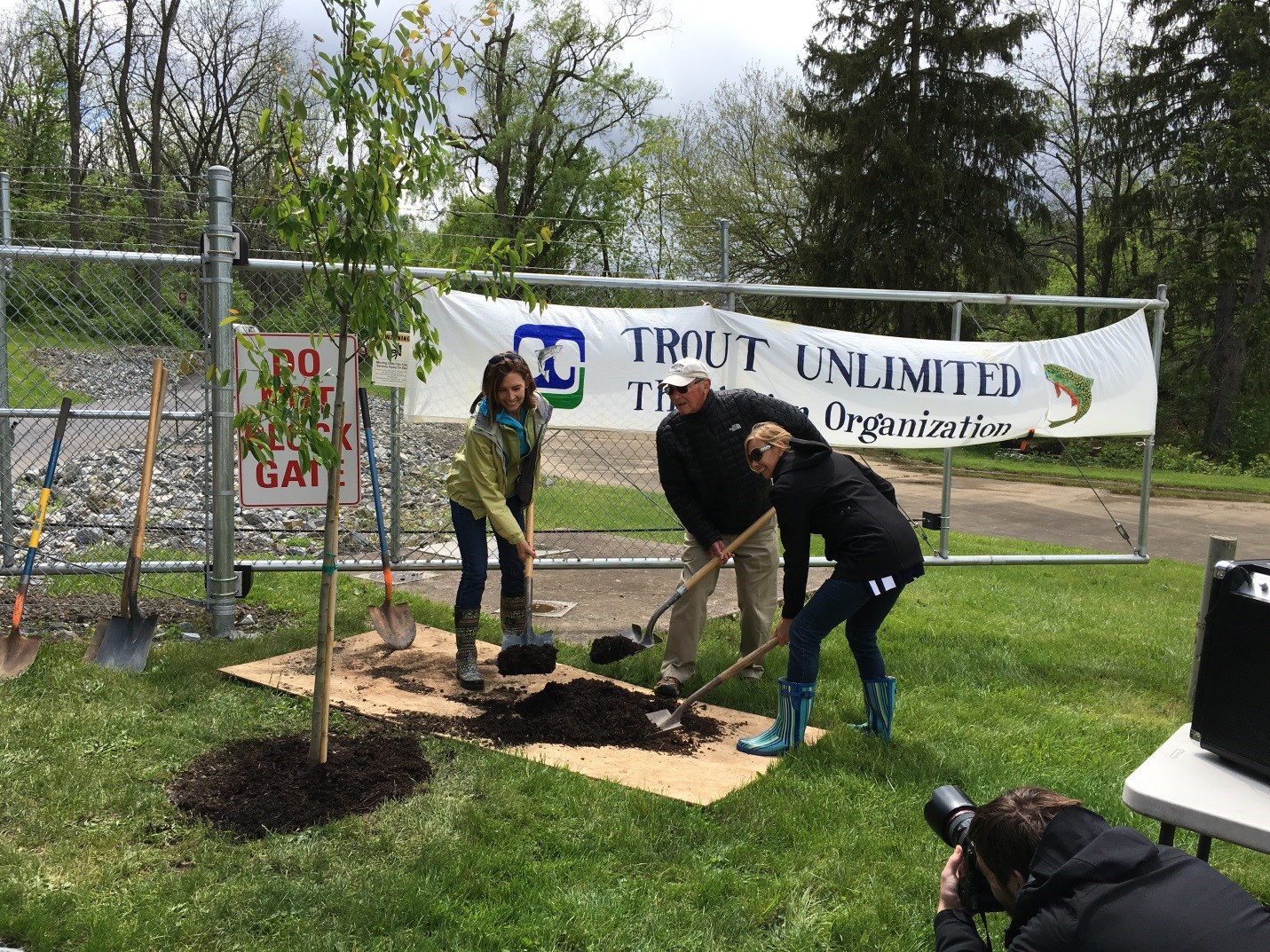 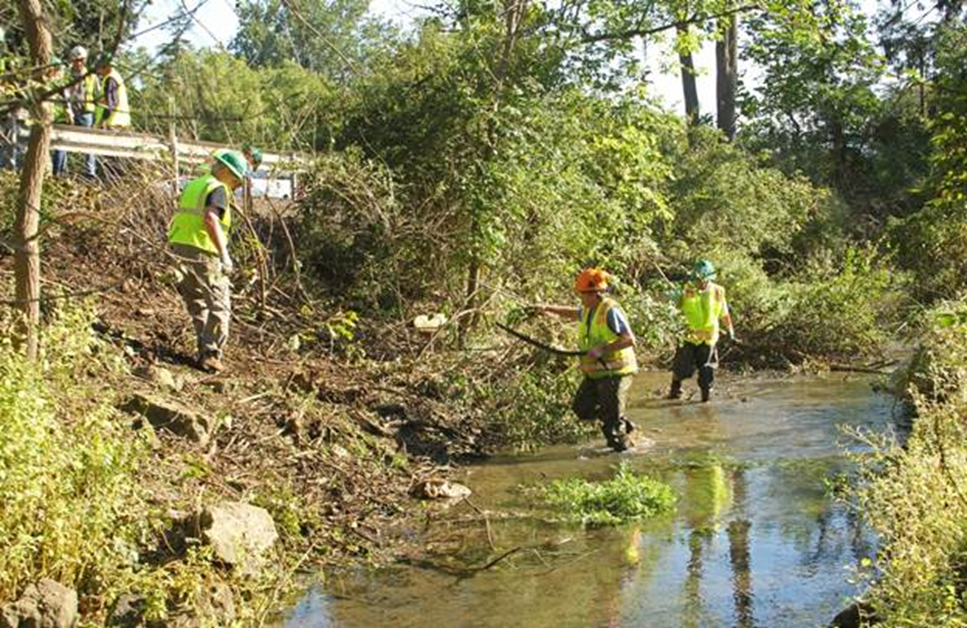 The Homeowner's Guide to Stormwater

Stormwater runoff can transport a large list of pollutants to surface waters and groundwater. In Spring Creek the effects of runoff from the Centre Region can be detected in the presence and diversit